Dirt: The eye of the storm 🎮

Put WarioWare in the MoMA.

Robin Sloan on the limited POV of first person gaming.

For all the spectacular variation in modern video games, all the ways they compete to out-render one another, particularly in the global hothouse of AAA production, they also exhibit a particular visual sameness that, once you see it, you will not unsee.

It’s this: every modern 3D video game unfolds in the eye of the storm.

If you have played or watched one, you know this view intimately. Your glossy avatar or targeting reticle remains fixed in the center of the screen while the game’s world tilts and tumbles around it. Your stand-in might sprint or roll, might open doors or leap off mountains, might shoot small guns or shoot large guns: they do it always from the center of the screen. No matter how much chaos surrounds you—and look at this chaos:

—your POV remains a serene island in the heart of the mayhem.

For me, the eye of the storm view is most noticeable when I’m watching streamers, whose broadcasts blur into pinwheels: tendrils of color spinning vortex-like around a fixed point.

The eye of the storm makes sense, design-wise: that fixed point is what a player tracks through 3D space; it provides the frame against which they judge the position and motion of other players, so they can click on their heads and kill them. The view MUST provide this stable continuity; a cinematic cut would be disastrous, a visual reset necessitating a total reorientation. In that gap, someone else might click on YOUR head.

It’s tempting to say the eye of the storm also simulates the experience of human vision in the real world. Don’t we also take the measure of our surroundings from a fixed point, one set atop our necks? Yes—but human vision is nothing like this.

In the real world, our gaze doesn’t swivel smoothly like a 3D video game. Rather, it shifts sharply from point to point, making little jumps which have a delicious name: “saccades.” Our brains actually SHUT OFF OUR VISION in these short intervals; like so many other things with the visual system, it’s basically insane.

You can test this easily: lift your eyes from this newsletter, and try to “pan” your gaze around the world, the way a movie camera might. You’ll find it’s impossible. No matter how smoothly you rotate your head, your eyes can only move in sharp leaps from one point of interest to the next.

(My understanding of saccades comes from Stanislas Dehaene’s book Reading in the Brain, which I highly recommend. As you might suspect: reading a book… about how you read books… starts to feel trippy, in a good way.)

Modern video games are, to generalize, competence engines, and the eye of the storm is just as superhuman as the other powers they grant you. Pair it with the smoothness of your digital stride, and you are never confused, rarely disoriented.

But, of course: disorientation is fun. The cut is THE central tool of film and TV, almost unbelievably powerful; one false blink can take a viewer to a different corner, or a different office, or a different planet—SMASH TO the glare of an alien sun. There is cinema that forsakes the cut—those showy single-take films, or the long continuous sequences in a movie like Children of Men—but they are truly exceptional and... they feel like video games!

One of the few games ever to enthusiastically, artistically embrace the cut is the cult classic WarioWare, which absolutely belongs in the MoMA. In WarioWare, you are confronted with a relentless stream of minigames, each with unique controls, none of which are explained ahead of time. In one minigame, you have to bounce on a trampoline; in another, slice a pizza; in the next, dodge molotov cocktails on your moped! Each minigame plays out in just a handful of seconds. It's bonkers and stressful and wonderful.

In the tiny slice of the game captured below, you (1) catch a falling rod, (2) spear a fish, (3) photograph a flying squirrel, and (3) capture... love? all in rapid succession—

—and it's fabulous. WarioWare revels in disorientation; it celebrates our ability to overcome it.

There’s little hope we will escape from the eye of the storm anytime soon. The rise of competitive gaming means the demand for fixed frames of references—extremely stable platforms from which to click heads—will only increase.

But there’s always terrain to be explored at the fringes. The cut is the fuel rod at the core of all cinema, still throwing off energy after all these decades. It has energy to offer video games, too, if game makers and players can give up their islands of stability and leap into the storm. — Robin Sloan

PS: If you like video games and Dirt, you’ll love our new t-shirt with Silphwave and Public Space. Only 50 are available for purchase at $40.

You can also buy a NFT edition of the Silphwave artwork and get the t-shirt for free. The NFT is 100/100 and .04 ETH on OpenSea; once you’ve purchased, message us in Discord or email newsletterdirt@gmail.com to get instructions for redeeming. 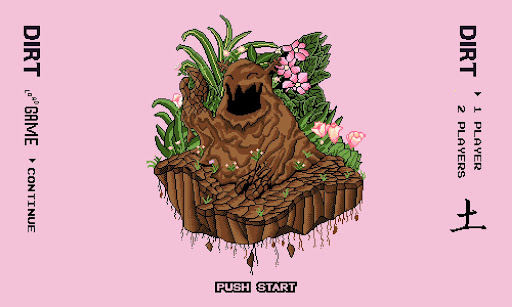